B3: Economics of Adaptation

Transitions of Autonomous Nodes in Consideration of User and Provider Preferences

Subproject B3 develops novel algorithms for decentralized analysis and planning of transitions in communication systems from an economic cross-layer perspective taking into account empirically collected user preferences. A key assumption is that nodes at the edge of the Internet decide individually and autonomously whether transitions between different mechanisms should be performed. The developed algorithms are investigated analytically, by simulation as well as experimentally based on examples of cross-layer application scenarios in wireless edge networks of software-defined autonomous nodes with particular focus on proactive transitions and coexistence of multi-mechanisms. 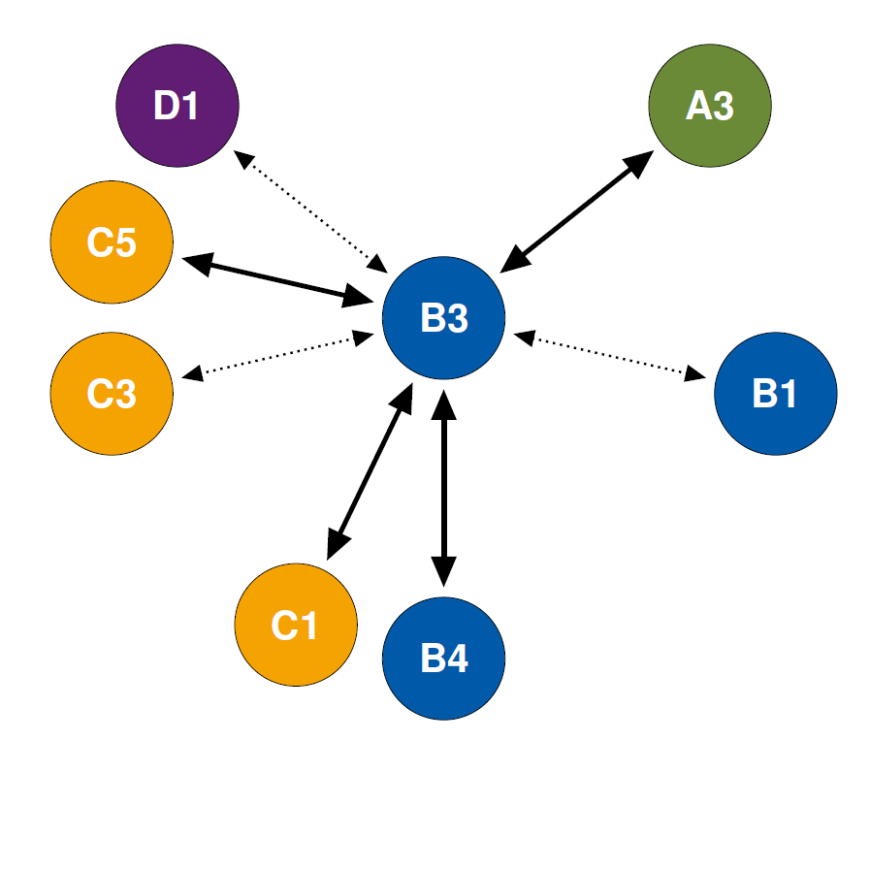 Subproject B3 investigates transitions in communication systems from an economic perspective. In B3, the mechanisms of the overlay and underlay are considered jointly with a focus on wireless communications at the edge of the internet, such as mobile or multi-hop wireless networks. In such networks, planning mechanism transitions at a centralized controller unit can be inefficient, for example due to high frequency of coordination required. B3’s key point here is to assume that the nodes of the network decide autonomously if they can perform a transition between two functionally equivalent mechanisms. Since every mechanism results in a certain benefit and a corresponding cost for a node, by using a local utility function, every node can individually evaluate and compare different mechanisms. The autonomous local mechanism transition of a node could result in an inefficient transition from the network perspective. This happens when the local utility function of a node is in conflict with the global utility function of the whole network.

In phase I of MAKI, decentralized algorithms were developed, in which by using proper incentives, the decisions made by the autonomous nodes are in favor of the network utility. The main scenario investigated in Phase I was distributed video streaming. From the underlay point of view, decentralized algorithms for energy-efficient data dissemination have been developed using game theory. From the overlay perspective, algorithms for adaptive video streaming, incentive mechanism for distributed video streaming and virtualization of resources were designed. Besides, simulation models for transitions in video-streaming applications and quality-of-experience-based measurement methods have been developed, which allow us to evaluate the designed algorithms. To take the special requirements of both underlay and overlay into account, a cross-layer model has also been proposed. Other scenarios studied in Phase I were in the field of cloud services for mobile networks. For instance, cloud-computing services, in which the transition is between local computation of a task at a mobile device and task offloading to cloud servers, as well as caching popular contents in base stations to improve the quality of service for mobile users, have been investigated. In these scenarios, centralized and decentralized algorithms using learning-based and game-theoretic algorithms have been proposed.

In phase II, the cross-layer-based economic model for decentralized analysis and planning of transitions will be extended, by additionally considering environmental data and empirical user preferences in the local utility function and incentive systems. For this purpose, the local utility function incorporates external information about the environment that are relevant for making decisions about transitions. Moreover, to make local utility functions more realistic and meaningful, user behavioural studies will be conducted based on market research methods to collect and understand user preferences. For this purpose, at first, technical features have to be translated to concepts that are easy to understand for potential users of such networks. The collected user preferences are then modelled into the utility functions and incorporated into transition decisions. The cross-layer-based decentralized analysis and planning will be extended considering the following aspects: First, proactive transitions will be studied for networks that dynamically change over time. For example, nodes can exploit experiences from previous transitions to make optimal transitions in future. Second, software-defined autonomous nodes will be studied, where we transfer the principles of software-defined communication systems to autonomous nodes. By programming proper local utility functions into nodes, a distributed control approach will be developed, which takes into account the different abilities of the nodes. This approach enables us to include user preferences into the local utility function either offline, by conducting user studies, or online, by adding an interactive user interface. Third, the requirements of transitions in case of coexistence of multiple mechanisms (multi-mechanisms) will be studied. In a multi-mechanism system, different applications require to run different mechanisms and the mechanisms may be in conflict with each other and compete for resources. Finally, the developed solutions are evaluated analytically, by simulation and by experiment using the examples of cross-layer-based scenarios.

In summary, subproject B3 of MAKI provides decentralized analysis and planning solutions for autonomous end devices. By additionally taking user preferences into account, the subproject allows an efficient and realistic application of proactive transitions for coexisting multi-mechanisms in wireless networks with software-defined autonomous nodes.