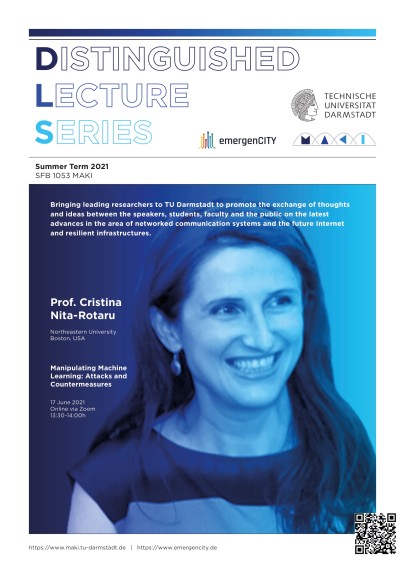 In this talk I will first present our work on attacks at testing time, also known as evasion attacks, against classification and regression models for self-driving car applications, specifically steering angle prediction. I will then show attacks at training time, also known as poisoning attacks, where attackers inject a small number of corrupted points in the training data with the goal to change the accuracy of the trained model. I will describe our proposed approach to constructing a defense algorithm called TRIM, which provides high robustness and resilience against a large class of poisoning attacks. I will conclude by pointing out ongoing challenges in ensuring security and privacy in recent applications of machine learning such as federated learning.

This work is based on the following two articles:

Her research lies at the intersection of security, distributed systems, and computer networks. The overarching goal of her work is designing and building secure and resilient distributed systems and network protocols, with assurance that deployed implementations provide their security, resilience, and performance goals. Her work received several best paper awards in IEEE SafeThings 2019, NDSS 2018, ISSRE 2017, DSN 2015 as well as two IETF/IRTF Applied Networking Research Prize in 2018 and 2016. She is a recipient of the NSF Career Award in 2006.