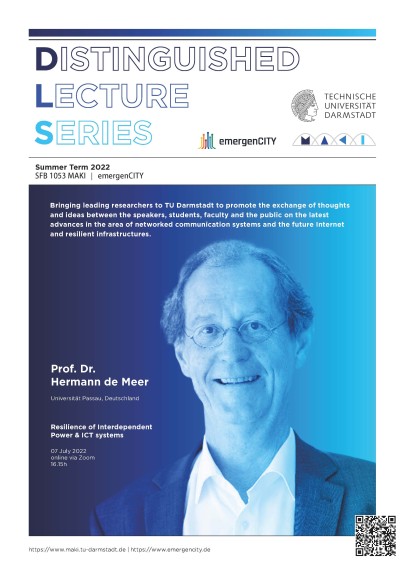 Abstract:
Resilience is a key property for communication systems. For plenty of systems being unavailable has only a mild impact such as a loss of revenue. This is, however not true for systems where critical infrastructures are involved. Failure to deliver clean water, heat or electricity leads to dire consequences where not only money but also human lives are on the line. This in turn dramatically increases the importance of resilience in these systems. This talk examines the relation of resilience and the interconnected ICT and power system in the context of smart grids. First, resilience is defined and key notions related to it are briefly summarized. Afterwards, the power system is examined regarding the challenges it faces due to exceptional circumstances. The focus of this talk is then twofold; on the one hand, the actions taken to remediate single line faults and frequency fluctuations are described; on the other hand, how disaster recovery looks like if these measures fails, is discussed. As for future grids a trend towards more renewable and more distributed generation as well as less reserve generation is predicted, these scenarios are explained while highlighting the role of distributed generation. Therefore, additional constraints and issues that arise from these energy sources are shown and discussed in the relation to the characteristics of resilience. To conclude recent and ongoing research activities are briefly presented.