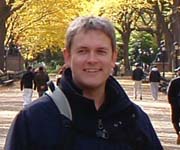 15 years ago, distributed multimedia applications were facing a major challenge: a lack of bandwidth in the Internet. Certainly, we had well-working protocols, servers, clients and coding formats, multicast seemed poised for global deployment, only some content owners were stalling. Well, they continued stalling, and peer-to-peer distribution was adopted by the people as a response; and with the people’s demand for bandwidth and ISP’s willingness to provide, the Internet grew quicker than ever, peer-to-peer research changed from a tiny niche to a major trend, and researchers managed to explore the potential of this principle to the fullest. Alas, centralized systems are very attractive, and a new streaming idea appeared in the form of adaptive TCP streaming, which is currently inspiring many researchers.

The forgotten resource throughout much of this development was time. With higher bandwidths and more concurrent streams, multiplexing gain in the Internet backbone grew, but a larger utilization of the networks required larger buffers, and for this we pay with (much) larger jitter. In a video-on-demand world, this might not have mattered. The world, however, has changed, and the Internet is used for much more, and this includes fields like the digital gaming industry, which is now worth more than the world-wide movie industry, and fields like the world’s financial markets, which are today strongly influenced by high-frequency trading. These highly valuable industries demand lower latency from the Internet of the future, and they demand it not only in backbone networks, but all they into wired and wireless access networks.

And this is what I expect for the next 10 years: a major research effort into means for reducing latency and loss in the wired and wireless Internet while sustaining bandwidth growth, driven by strong commercial demands for interactive services. These services, however, will face an unprecedented range of recording and projection devices, including multi-k-camera arrays, under-the-skin health monitors, holographic displays and wavefield speakers in the living room, and mobile multi-sensory devices embedded in unobtrusive wearable items. Users will expect an integrated experience from their personal set of devices, everywhen and everywhere. This will require a much stronger, cross-discipline research effort into the understanding of quality in multimedia experiences, to be able to adapt to the limits of networks and systems. And on the way there we will face quite many surprises, just like we did in the last 15 years.

Carsten Griwodz leads the Media Department at the Norwegian research company Simula Research Laboratory AS, Norway, and is professor at the University of Oslo.

He received his Diploma in Computer Science from the University of Paderborn, Germany, in 1993. From 1993 to 1997, he worked at the IBM European Networking Center in Heidelberg, Germany. In 1997 he joined the Multimedia Communications Lab at Darmstadt University of Technology, Germany, where he obtained his doctoral degree in 2000. He joined the University of Oslo in 2000 and Simula Research Laboratory in 2005.

Carsten’s research interest is the performance of multimedia systems. He is concerned with streaming media, which includes all kinds of media that are transported over the Internet with a temporal demand, including stored and live video as well as games and immersive systems. To achieve this, he wants to advance operating system and protocol support, parallel processing and the understanding of the human experience.