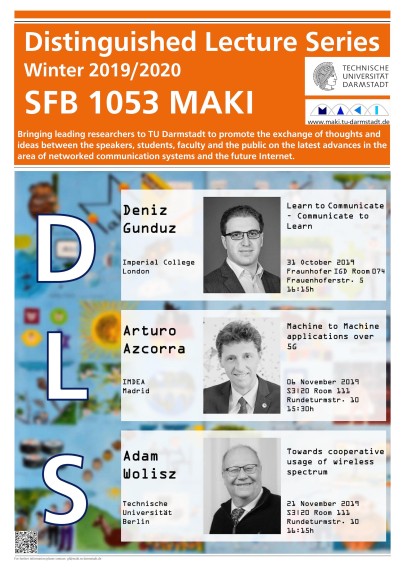 This talk will be on the interplay between machine learning and wireless communications. In the first part of the talk I will show how machine learning can help improve and simplify wireless communication systems. Communication system design traditionally followed a model-based approach, where highly specialized blocks are designed separately based on expert knowledge accumulated over decades of research. While this modular approach has been tremendously successful for many applications, I will show that data-driven end-to-end designs can meet or even surpass the performance of these highly optimised block-based architectures.

In particular, I will focus on wireless image transmission, and show that deep learning based joint source-channel coding architecture not only outperforms state-of-the-art digital communication systems based on separate image compression (BPG/ JPEG200) followed by near capacity-achieving channel codes (LDPC), but also provides graceful degradation with channel quality and adaptation to bandwidth.
In the second part of the talk, I will focus on federated learning across wireless devices at the network edge, and show that jointly designing the communication protocol with the learning algorithm significantly improves the efficiency and accuracy of distributed learning across bandwidth and power limited wireless devices compared to the standard approach that separates learning and communication.

In both parts of the talk I will highlight the convergence of machine learning and wireless communication system design, and point to some exciting new research problems.

Deniz Gunduz received his M.S. and Ph.D. degrees in electrical engineering from NYU Tandon School of Engineering in 2004 and 2007, respectively. After his PhD, he served as a postdoctoral research associate at Princeton University, and as a consulting assistant professor at Stanford University. He was a research associate at CTTC in Barcelona, Spain until September 2012, when he joined the Electrical and Electronic Engineering Department of Imperial College London, UK, where he leads the Information Processing and Communications Lab. His research interests lie in the areas of information theory, machine learning and privacy. Dr. Gunduz is an Editor of the IEEE Transactions on Green Communications and Networking, a Guest Editor for the IEEE Journal on Selected Areas in Communications Special Issue on “Machine Learning for Wireless Communications”, and served as an Editor of the IEEE Transactions on Communications (2013-2018). He is the recipient of the IEEE Communications Society – Communication Theory Technical Committee (CTTC) Early Achievement Award in 2017, a Starting Grant of the European Research Council (ERC) in 2016, IEEE Communications Society Best Young Researcher Award for the Europe, Middle East, and Africa Region in 2014, Best Paper Award at the 2016 WCNC, and the Best Student Paper Awards at the 2018 WCNC and 2007 ISIT.