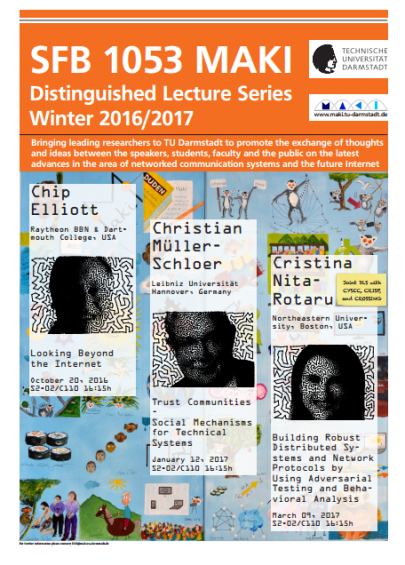 „Looking Beyond the Internet “

The technical structure of the Internet is now starting to undergo a major transformation into its next generation, which many are calling Software Defined Infrastructure (SDI). It will leverage today's trends in software defined networking, network function virtualization, edge clouds, and so-called „5G“ wireless technologies. This transformation is opening up major new opportunities for research. We will briefly discuss this transformation as well as the next steps being planned from a United States perspective.

Chip Elliott is Chief Scientist at Raytheon BBN Technologies, Adjunct Professor of Computer Science at Dartmouth College, a Fellow of the AAAS, ACM, and IEEE, and an active inventor with over 90 issued patents. He has served on many national panels and has held visiting faculty positions at Tunghai University in Taiwan and the Indian Institute of Technology, Kanpur. As founding GENI Project Director, Chip led the GENI community in bringing the project to fruition, building from early concept and design to its nationwide deployment. As GENI Futures Director, he is responsible for planning „what comes after GENI,“ with a mission to maximize the impact and adoption of GENI technology and concepts.