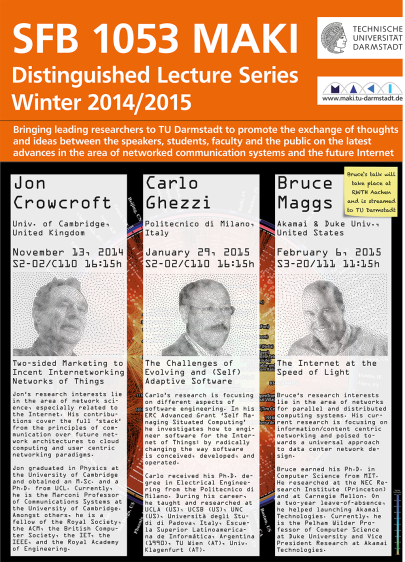 There is no internet of things yet, just a bag of separate networks of silos of disparate services. This is reminiscent of the days of data communications before the Internet, and needs to be fixed. We take some recent ideas from the latter day internet and see if they can help leverage this.

Jonathan Andrew „Jon“ Crowcroft is the Marconi Professor of Communications Systems in the Computer Laboratory of the University of Cambridge. Crowcroft graduated with a Bachelor of Arts degree in Physics from Trinity College, Cambridge in 1979, gained an Master of Science degree in Computing in 1981 and PhD in 1993, both from University College London. Crowcroft joined the University of Cambridge in 2001, prior to which he was Professor of Networked Systems at University College London in the Computer Science Department. He is a Fellow of the Royal Society, Fellow of the Association for Computing Machinery, a Chartered Fellow of the British Computer Society, a Fellow of the Institution of Electrical Engineers and a Fellow of the Royal Academy of Engineering, as well as a Fellow of the IEEE. He was a member of the Internet Architecture Board 96-02, and attended most of the first 50 IETF meetings. He was general chair for the ACM SIGCOMM conference between 1995 and 1999, and received the SIGCOMM Award in 2009. The award to Jon Crowcroft is „for his pioneering contributions to multimedia and group communications, for his endless enthusiasm and energy, for all of the creative ideas he has so freely shared with so many in the networking community, and for always being outside the box“.

Jon has had major contributions to a number of successful start-up projects, such as the Raspberry Pi and Xen. He has been a member of the Scientific Council of IMDEA Networks since 2007. He is also on advisory board of Max Planck Institute for Software Systems. Jon had written, edited and co-authored a number of books and publications which have been adopted internationally in academic courses, including TCP/IP & Linux Protocol Implementation: Systems Code for the Linux Internet, Internetworking Multimedia and Open Distributed Systems.