In recent years, the Internet’s transport layer has undergone some significant changes. Notable examples of newly standardized protocols are QUIC, HTTP/3 and Multi-Path TCP. Application developers should be able to benefit from these developments without having to-rewrite their code for any new protocol X that is being developed. The Transport Services (TAPS) Working Group of the Internet Engineering Task Force (IETF) makes this possible with a modern protocol-agnostic API and mechanisms underneath it, to engage and control protocols based on application requirements.

One implementation of a TAPS system is particularly noteworthy: Apple, one of the contributors to the TAPS WG, has recently made a move towards a TAPS-conformant transport system with their new Network.framework API (available since the beta for iOS 12 and macOS Mojave), first presented at the Apple Worldwide Developers Conference (WWDC) 2018. Network.framework, like any other TAPS transport system, breaks the static binding between applications and transport protocols. This allows the Operating System to dynamically test multiple network interfaces and protocols, configuring them according to the application's and user's needs.

This talk will give an overview of these new developments and explain what they mean for research: why is the transport layer now interesting? What is truly happening „under the hood“ today, and which aspects are still undefined? How could new research fit into this picture?

Michael Welzl is a full professor in the Department of Informatics of the University of Oslo since 2009. He received his Ph.D. (with distinction) and his habilitation from the University of Darmstadt / Germany in 2002 and 2007, respectively.

His book „Network Congestion Control: Managing Internet Traffic“, is the only introductory book on network congestion control. Michael has been active in the IETF and IRTF for many years, e.g. by chairing the Internet Congestion Control Research Group (ICCRG) leading the effort to form the Transport Services (TAPS) Working Group. He has also participated in several European research projects, including roles such as coordinator and technical manager. 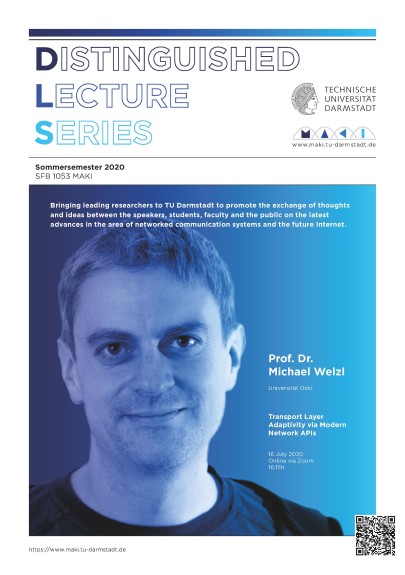