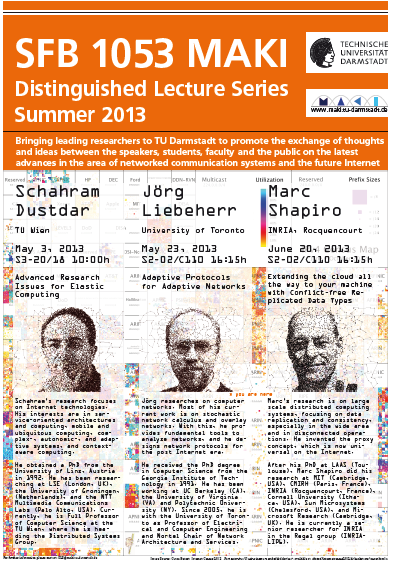 Self-organizing networks have emerged as a powerful paradigm for providing network services. Unlike traditional infrastructure-based networks, self-organizing networks are formed and operated in a fully distributed manner, and do not rely on centralized mechanisms for network formation, management, or operation. Compared to conventional networks, self-organizing networks are better suited to adapt to changes of network topology, traffic mix, and service requirements. This talk will make a case that self-organizing networks are suitable to dynamically adapt network services offered to applications. We present our recent efforts on developing mechanism to deploy customizable data delivery services. In our approach, a data delivery service is expressed in terms of an XML specification, which defines a finite-state machine for the service. Network nodes dynamically load a service specification and instantiate finite-state machines on-demand without the need to update the protocol implementation. An evaluation of these mechanisms in the HyperCast overlay middleware, sheds light on the performance tradeoffs of the approach.

Jörg Liebeherr received the Ph.D. degree in Computer Science from the Georgia Institute of Technology in 1991. After a Postdoc at the University of California, Berkeley, he joined the Department of Computer Science at the University of Virginia in 1992. In 1997-1998 he was an Associate Professor in the Department of Electrical Engineering at Polytechnic University. Since Fall 2005, he is with the Department of Electrical and Computer Engineering of the University of Toronto as the Nortel Chair of Network Architecture and Services. He has served on editorial boards and organization committees of several journals and conferences in computer networking. He was Editor-in-Chief of IEEE Network in 1999-2000. He is a co-author of the textbook ``Mastering Networks: An Internet Lab Manual'', published by Addison-Wesley in 2004. He was co-recipient of a best paper award at ACM Sigmetrics 2005. He served on the Board of Governors of the IEEE Communications Society in 2003-2005, and chaired the IEEE Communications Society Technical Committee on Computer Communications in 2004-2005. He is a Fellow of the IEEE. His current research interests are self-organizing networks and network calculus.